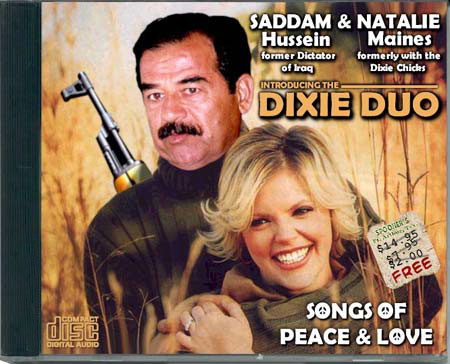 THEY DESERVE EACH OTHER

Letter from radio station website in Lubbock, home of the

Dixie Chick that spewed forth about our President:

"Earlier this week, while performing in London, you stated that you were

ashamed that our President is from your home state. I wonder if you

realized how many Americans would be listening.

This American was listening. This Texan is ashamed that

you come from my state. I serve my country as an officer in

the United States Navy. Specifically, I fly F-14 Tomcats off carriers around

the world, executing the missions that preserve

the very freedom you claim to exercise. I have proudly fought

for my country in the skies over Kosovo, Iraq and

Though I may disagree wholeheartedly with your comments, I will defend

to the death your right to say them, in America.

is cowardice behavior. Would you have so willingly made those comments

while performing for a patriotic, flag-waving crowd of Texans in Lubbock?

I would imagine not.

How dare you pocket profits off songs about soldiers, their

deaths and patriotism while criticizing their Commander in

Chief abroad, even while they prepare to give their lives to

ensure your own freedom of speech.

Please ask yourself, what have you done to deserve that

sacrifice? Do not try to justify your comments by claiming

that you made them only because you care about innocent lives.

purpose of taking innocent lives. We do it to protect innocent

lives, even yours. If the world leaders of the late

1930's had the vision and courage of our present Commander

in Chief, perhaps the evil men who caused the death of millions

in WWII would have never had the opportunity to harm a soul.

In a separate correspondence, I am returning to you each

and every Dixie Chicks CD and cassette that I have ever

purchased. Never again will I allow my funds to support

American "Celebrities" who have failed to realize that

they have obtained their successes on the backs of the

American blue-collar workers such as our

To Natalie Maines: This Texan? this American will continue to risk

his life to guarantee your freedoms. What will you do to deserve it?"